Bardenas Reales Narural Park is just south of the Pyrenese in central northern Spain and a visit will give one of the biggest surprises that any traveler will encounter in Spain. On entering the Bardenas Reales Natural Park you may be forgiven for thinking you have been transported to the high deserts of California. The Bardenas Reales look more like Monument valley than a region of Spain. Its strange rock formations and desert landscape look like the backdrop of a Spaghetti Western. I hope you enjoy these photo, Paul Williams.

See More of Our Photos of The Bardenas Reales and Spain

When travelling through the wine region of Rioja in northern Spain the last thing you expect to come across is a badlands area that looks more like Death Valley or Monument Valley in the USA than an area of Spain. This is the Bardenas Reales Natural Park which is an area located south of the Pyrenees Mountains in South East Navarre.

The Bardenas Reales is 45 km (28 mi) from north to south and 24 km (15 mi) east-west and at an altitude ranging between 280 and 659 m (919 and 2,162 ft). While the Pyrenees and central Spanish mountains were being pushed up tremendous forces built up that caused the collapse of the Ebro Basin creating an inland sea. Sediments from the Pyrenees were washed down into the basin during the Eocene period 56 to 33 million years ago. Fine sand, clays and limestones settled in the deeper waters and as the sea filled up gravels and sands formed on top. Ten million years ago the basin opened up to the Mediterranean Sea and drained leaving harder sandstones onto of softer clays. Over the last ten million years water erosion has etched V shaped valleys and gullies into the rock and in the valley floors, as the clays were washed away, conical rock formations have formed capped with the harder sandstone rock.

Today the Bardenas Reales Natural Park is a wonder land of rock formations with fertile field in between that grow cereal crops in the wet winters and early spring. By the summer though when the crops have been harvested and any shrubbery has been burt off by the summer sun, the Bardenas Reales become a desert region that resemble the set of a Spaghetti Western. You can’t help but feel that a stagecoach fleeing from Indians on horseback might appear at any moment around the next corner. The whole experience of the Bardenas Reales Natural Park is like walking into a movie.

Driving into the Bardenas Bardena Blanca. is an incredible experience. Within a few minutes you leave the fertile plateau of Navarra and drop into the Bardenas basin. A dirt road runs around the central area of the park passing the main rock formation attractions. To add to the strangeness of the area at its centre is a military zone which at night becomes a target practice area for military fighter planes. 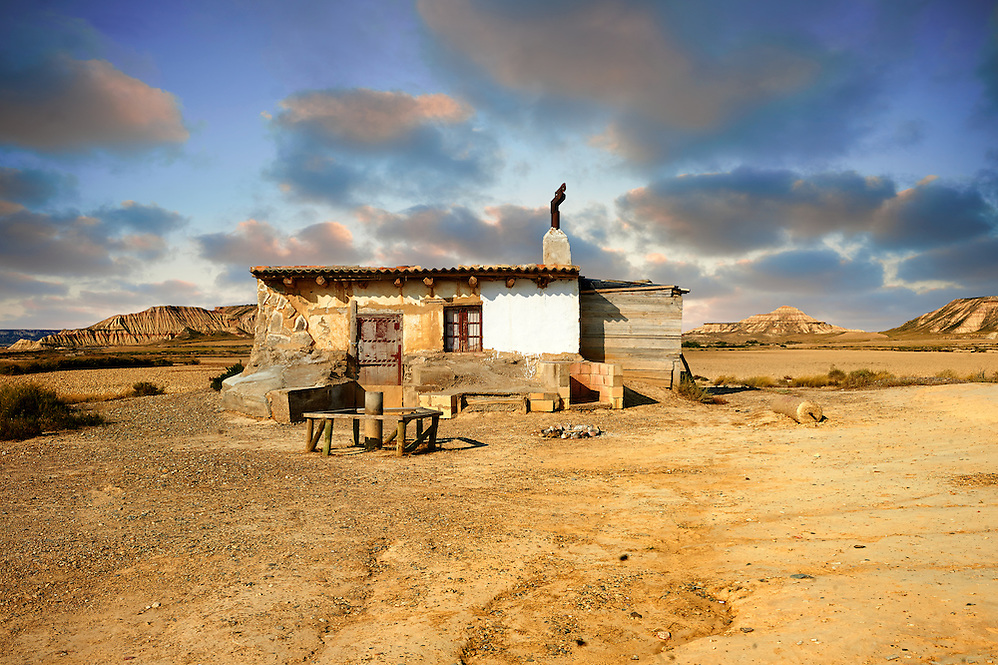 Photos of the Bardenas Reales Natural Park can be downloaded on line as stock photos or bought on line as photo art prints.

FunkyStock Photo library spacialises in stock pictures and images of European destinations, toruist and travel photos and landscapes, food photos by award winning photographer Paul Williams and photos of historic and archaeological sites in Europe, North Africa and the Middle East. All our photos are available to buy and download on line.

Photos of the Ancient World