‘One of the greatest architectural decorative forms is the Arabesque. Arab mathematicians created incredibly intricate designs in plaster, tiles, and wood to decorate their palaces. Based on Islamic ideas theological ideas that banned representations of God, Islamic designers glorified God by producing intricate designs that demonstrated the eternal depths of Gods being. To this end this gallery of photos is dedicated to the great Islamic craftsmen, I hope you enjoy the photos.’ Paul Williams.


See More of Our Photos of Villa Adriana Tivoli

The arabesque is a form of artistic decoration consisting of surface and relief decorations based on repeating and linear patterns of scrolling and interlacing foliage, tendrils or plain lines. This builds in complexity to produce the incredible Mocarabe Arabesque stalactite plaster work ceilings such as those in the Alhambra Palace Granada.

As in Judeism it is forbidden in Islam to depict God or any prophet or divinity figuratively which is why there are no depictions of the prophet Muhammed. Although secular figurative art is allowed in parts of Islam, Islamic art, if it can be called that, is typified by the use of geometrical floral or vegetal designs in a repetition known as the arabesque. Built on geometric and repeating patterns, Arabesque art attempts to show that the nature of God is infinite and indivisible with the spectacular results that can be seen in the great Islamic buildings of the world.

Geometric patterns have fascinated man for thousands of years as can be seen in the megalithic art of Ireland and the British Isles. As man discovered mathematics and mathematical theories the interlocking circle designs of pre history gave way to the much more sophisticated Tessellation. Derived from the Latin tessera, referring to cubes used in the making of mosaics, tessellation is flat surface that has been tiled using one or more geometric shape. The Romans were fascinated by tessellations such as the Gordian knot design or interlocking cubes that gave a 3D effect to floor mosaics.

In the 630’s the Arabs erupted out of the Arab Peninsular like a volcano that took the mighty eastern Byzantine Roman Empire completely by surprise. The Arabs swept across North Africa conquering Byzantine lands and by 718 were sieging Constantinople (Istanbul) the capital of the Byzantine Empire. In just 80 years North Africa, the Middle East and the Persian Empire came under the rule of Islam. The new Arab rulers were fascinated by the technology and philosophy of the cultures they captured and, amongst other things, became great mathematicians taking geometric designs to a new level. They absorbed and mixed Byzantine Roman and Persian ideas and came up with the even more intricate design solution known as Arabesque. The uniformity of Islamic design ideas is incredible with architecture, tile and plasterwork designs following the same principles from the Mazar-e Sharif Mosque in Afghanistan to the Alhambra Palace in Spain but each having its own regional variations. 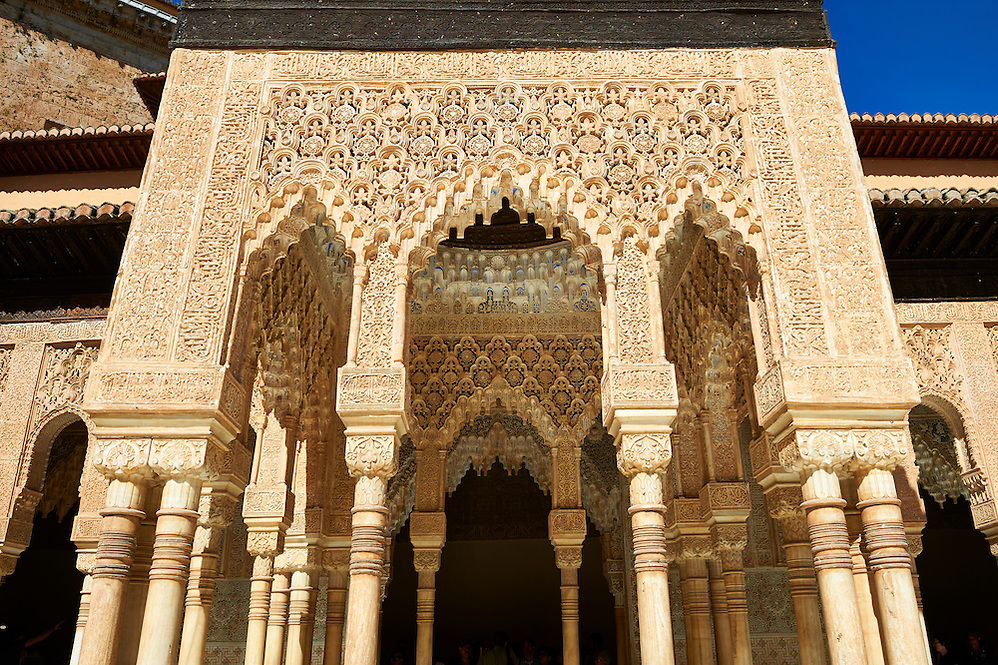 Pre Islamic Arabesque influences can be seen in the Byzantine Roman column capitals of Hagia Sophia ( present day Istanbul) and the early examples of Muqarnas can be found in pre Islamic Samara in Iraq. In Arabesque plasterwork calligraphy with religious messages is interwoven with geometric deigns. The style is typified by deeply recessed reliefs and long narrow plaster panels with calligraphy which are commonly used above courses of geometric tiles throughout Islamic buildings. Arabesque architectural decorations are utilised in all aspects of Islamic architecture. Exterior and interior surfaces are often completely covered with geometric tiles and doorways, niches, window arches and ceiling are given great attention with incredibly intricate wood and plaster work designs as can be seen in the Mocarabe, Honeycomb work or Stalactite work, in the Alhambra Palace in Granada.

Arabesque tile and ceramic designs are a great feature of Islamic architecture. One of the highlights are the Iznik tiles of the Ottoman Empire used with spectacular effect in interior of the Topkapi Palace in Istanbul. Tile making in all parts of the Islamic Middle East and North Africa produce incredible geometric tile designs. From the Exterior tiles of the Dome of the Rock In Jerusalem and The Friday Mosque in Herat, Afghanistan to the Berber Arabesque tiles of North Africa and the Alhambra in Spain, the variation in Islamic tile and ceramic design is seemingly endless.

Arabesque art has influenced western art since the Middle Ages. The Normans of Sicily fused their northern European culture with that of the Byzantine Romans and Islamic art to produce great interiors like that of the Palatine chapel in Palermo with its wooden Arabesque stalactite ceiling. Byzantine oriental textiles and decorative arts were introduced into Europe via Venice who embraced the style in the architecture of great Palaces that line the Grand Canal. The Moors of Spain produced Hispano Moresque lustreware which was highly prized by the Christian countries of Europe. The Islamic influences in Spain led to the Mudéjar art is a style influenced by Islamic art that developed from the 12th century until the 16th century in the Iberia’s Christian kingdoms. It is the consequence of the convivencia between the Muslim, Christian and Jewish populations in medieval Spain. The elaborate decoration typical of Mudéjar style fed into the development of the later Plateresque style in Spanish architecture, combining with late Gothic and Early Renaissance elements.

FunkyStock Photo library spacialises in stock pictures and images of European destinations, toruist and travel photos and landscapes, food photos by award winning photographer Paul Williams and photos of historic and archaeological sites in Europe, North Africa and the Middle East. All our photos are available to buy and download on line.

Photos of the Ancient World